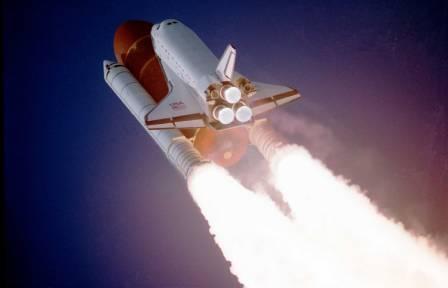 NASA’s Space Shuttle, officially called the Space Transportation System (STS), is the spacecraft currently used by the United States government for its human spaceflight missions. At launch, it consists of a rust-colored external tank (ET), two white, slender Solid Rocket Boosters (SRBs), and the orbiter, a winged spaceplane which is the space shuttle in the narrow sense.

The orbiter carries astronauts and payload such as satellites or space station parts into low earth orbit, into the Earth’s upper atmosphere or thermosphere. Usually, five to seven crew members ride in the orbiter. The payload capacity is 50,000 lb (22,700 kg). When the orbiter’s mission is complete it fires its Orbital Maneuvering System (OMS) thrusters to drop out of orbit and re-enters the lower atmosphere. During the descent and landing, the shuttle orbiter acts as a glider, and makes a completely unpowered (“dead stick”) landing. 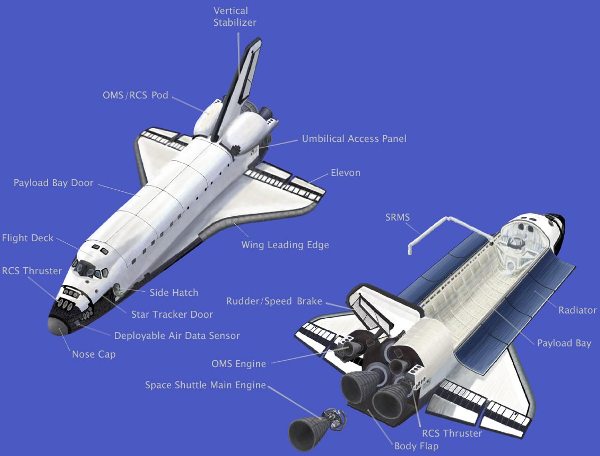 Scheme of the space shuttle.

The shuttle is the first orbital spacecraft designed for partial reusability. It carries payloads to low Earth orbit, provides crew rotation for the International Space Station (ISS), and performs servicing missions. The orbiter can also recover satellites and other payloads from orbit and return them to Earth, but this capacity has not been used often. However, it has been used to return large payloads from the ISS to Earth, as the Russian Soyuz spacecraft has limited capacity for return payloads. Each Shuttle was designed for a projected lifespan of 100 launches or 10 years’ operational life. The man responsible for the design of the STS was Maxime Faget, who had also overseen the Mercury, Gemini and Apollo spacecraft designs. The crucial factor in the size and shape of the Shuttle Orbiter was the requirement that it be able to accommodate the largest planned spy satellites, and have the cross-range recovery range to meet classified USAF missions requirement for a one-around abort for a polar launch. Factors involved in opting for ‘reusable’ solid rockets and an expendable fuel tank included the desire of the Pentagon to obtain a high-capacity payload vehicle for satellite deployment, and the desire of the Nixon administration to reduce the costs of space exploration by developing a spacecraft with reusable components. 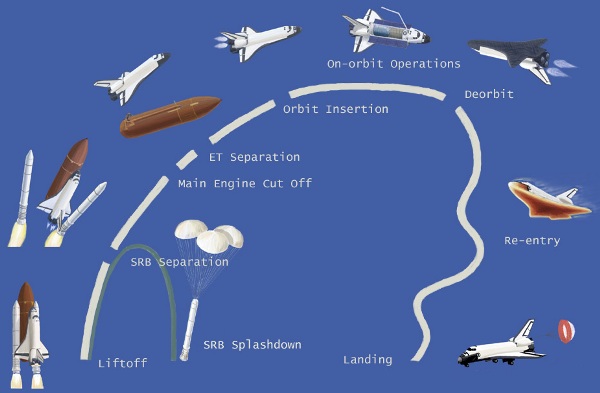 Six shuttles have been built; the first orbiter, Enterprise, was not built for actual space flight, and was used only for testing purposes. Five space-worthy orbiters were built: Columbia, Challenger, Discovery, Atlantis, and Endeavour. Challenger disintegrated 73 seconds after launch in 1986, and Endeavour was built as a replacement. Columbia broke apart during re-entry in 2003.

The first prototype was launched in 1977 which is more than 30 years ago. In 2004, NASA announced that the Space Shuttle would be retired in 2010, and from 2014 on, would be replaced by the Orion, a new vehicle that is designed to take humans to the Moon and beyond. 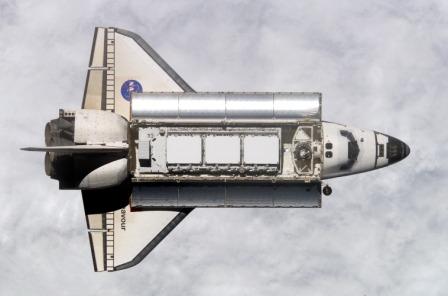 Space shuttle carrying a piece of the international space station.