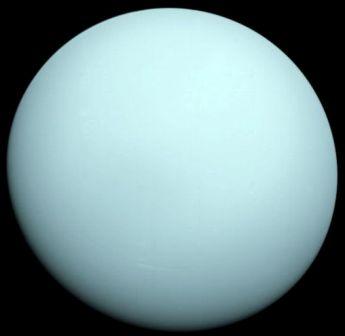 Uranus is a strange planet because it is tilted on its side and thus the moons orbit “north and south” instead of “east and west”. The planet is orbited by several medium-sized and asteroid-sized moons, but no large ones like in Jupiter or Saturn systems. The medium sized moons are: Titania, Oberon, Umbriel, Ariel and Miranda.

Miranda is a very strange moon. It is criss-crossed by huge canyons, which makes it look like if it was made up of a few huge chunks of rock. It is believed that early in its history this moon has been shattered into pieces and later reassembled by the force of gravity.

There would be bases and settlements on all of the moons of Uranus and the largest would also have domed crater ecospheres like those of the Moon, Mercury poles or medium-sized moons of Saturn.