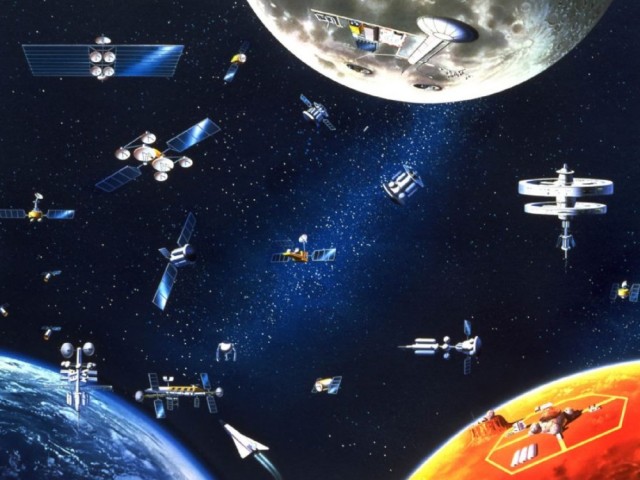 Now that you know what are the reasons of colonizing space you can read about the plan itself. This plan is presented briefly below and in more details on the next pages. It is a synthesis of the plans of great visionaries such as Marshall T. Savage, Gerard K. O’Neil, Robert Zubrin, Freeman Dyson, Arthur C. Clarke or Kim Stanley Robinson as well as some ideas of my own. It had been divided into 20 phases.

The first two phases describe how we should start the colonization of space. You will learn there how we could find the financing as well as a more economical and safe mean of transport to space than NASA’s space shuttle. In the third phase we see the colonization of Earth’s orbit while in the fourth we return to the Moon, this time to stay. A permanent base would be established there. Later numerous settlements and colonies would be built on the Moon. Then it would be the turn of the Near Earth Objects (NEOs) to be exploited and colonized during the fifth phase. With their ressources we will build huge autosufficient cities in space at the sixth phase.

The seventh phase would be a veritable giant leap for humanity. By colonizing the planet Mars, we will finally become a true spacefaring multi-planetary civilisation. At the eight phase we will build a space elevator enabling us to move a significant part of Earth’s population to space. This would give a huge boost to space colonization and at the ninth phase the asteroid belt would be exploited and colonized. Later on, at the tenth and eleventh phases we will exploit the interior planets, that is Venus and Mercury. At the twelfth phase we will massively exploit the Sun by constructing numerous solar energy colectors in close orbit to the Sun which will make them more efficient.

At the thirtieth phase we will make another giant leap by colonizing Jupiter’s moons. Thus our expansion would lead us beyond the internal solar system. The colonization of Saturn and its moons during the fourteenth phase would also be a huge step, since Saturn is almost twice as far from the Sun than Jupiter. Then it will be the turn of the moons of Uranus and Neptune to be colonized during the fifteenth and sixteenth phases. In this way there would only be the Kuipter belt and Oort clound left to be colonized during the seventeenth phase. In this far region of the solar system there are trillions of comets and other small bodies waiting to be exploited and colonized.

The eighteenth phase would be even more than a giant leap, since our expansion would lead us to other stars and planets beyond the gravitational pull of our Sun. In these far future times our technology would probably be enough advanced to enable us to build some megastructures, sometimes even bigger than entire planets. Thus in the ninteenth phase we will become true “World Builders”. Ultimately during the twentieth and last phase, we will have colonized the entire galaxy and maybe even beyond. Unless with the invention of interstellar travel faster than the speed of light, it would take us a few milion years, but we will get there one day…