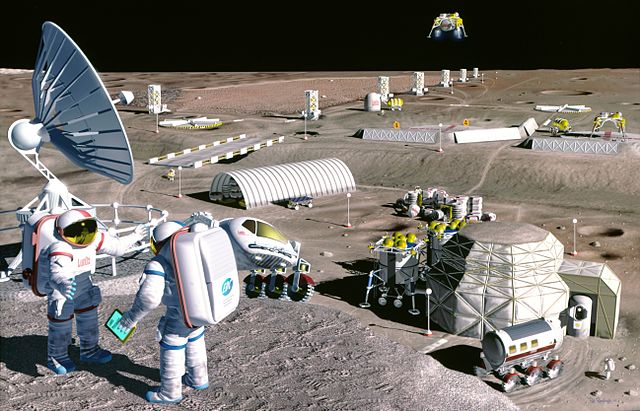 “Suppose you wake up one morning to discover that you and 200 companions have been cast up on a remote, uninhabited island with no hope of imminent rescue. In a few years, you establish a settlement and children arrive; but you begin to deplete the game supply, as well as the timber supply you use for fuel and housing. At the same time, you build boats and learn to navigate the bays and reefs around your island, occasionally venturing out onto the open sea. For the moment, your community is thriving, but its very prosperity portends future crisis. You can predict, not necessarily a disaster, but a change in lifestyle. The island won’t support an ever expanding population. Even with a constant population, you may have to shift to materials that are different from those you have been using – perhaps with more emphasis on those from the sea.”

“During this period, explorers from your community have climbed the highest mountains and sighted a number of other islands barely visible in the haze around the distant horizon. Some of them may be desert islands; some may be mere rocks with colonies of birds and seals; some may have forests. Even if they are poor in the materials you use now, these islands may have other materials you could adapt to your puposes. You won’t know until you go look.”

“At such a moment in your community’s history, you would probably adopt a fourfold plan of action: 1) discourage population growth, 2) emphasize conservation of raw materials, 3) start a program to identify substitute materials, and 4) begin construction of large boats to allow navigation forth and back from the other islands.”

“This story, of course, is a metaphor for where we are now. We have established a thriving community, and our population is getting too big for our island. A few hundred years ago we did wake up to discover our isolation on island Earth as well as an amazing fact: certain pinpoints of light in the night sky are other islands.”

Source of quotation: Out of the Cradle, exploring the Frontiers beyond Earth by William K. Hartmann, Ron Miller & Pamela Lee.

This is where we are now, we have observed and explored space, and soon it will be time to colonize it. It is a necessity, not only because of the dangers menacing our planet, but also because of the numerous advantages it would give us.

In this video you can see what would happen if a huge meteroid collided with the Earth. This would be the total extinction of humanity and most of other life forms, unless we colonize space. Learn More.