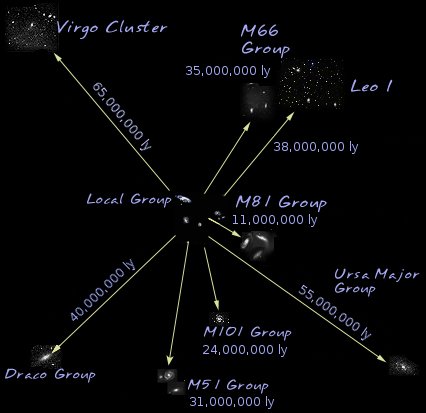 The Virgo Supercluster or Local Supercluster is the galactic supercluster that contains the Local Group, the latter containing, in its turn, the Milky Way and Andromeda galaxies.

The diameter of the Supercluster is about 200 million light years; it contains about 100 groups and clusters of galaxies and is dominated by the Virgo cluster near its center. Our Local Group is located near the edge and is being drawn inward toward the Virgo cluster.

By tracking its gravitational effect on the movement of galaxies, one can estimate that the total mass of the Virgo Supercluster is about 1015 solar masses (2 × 1046 kg). As its luminosity is far too small for this number of stars, it is thought that a large part of its mass is dark matter.

The entire Virgo Supercluster is being pulled toward a gravitational anomaly known as the Great Attractor, which lies near the Norma cluster.

The Virgo Supercluster is subdivided into groups of clusters called galaxy clouds. Three clouds are on the disk component: Virgo cluster, Canes Venatici Cloud and Virgo II Cloud. The halo consists of many elongated clouds pointing toward the Virgo Cluster.