The Milky Way is orbited by several smaller galaxies, called satellite galaxies. In total there are 13 known galaxies orbiting the Milky Way (one large galaxy and 12 dwarf galaxies). The total number of stars in the Milky Way and its satellites is estimated to 225 billion.

The Sagittarius Dwarf Elliptical Galaxy (SagDEG) is an elliptically looped shaped satellite galaxy of the Milky Way Galaxy. The main cluster which, in 1994, was the first to be discovered, is roughly 10,000 light-years in diameter, and is currently about 70,000 light-years from Earth and traveling in a polar orbit at a distance of about 50,000 light-years from the core of the Milky Way (about 1/3 the distance of the Large Magellanic Cloud). It is slowly being ripped apart by our galaxy. Sag DEG should not be confused with Sag DIG, the Sagittarius Dwarf Irregular Galaxy, a small galaxy over 4 million light-years distant.

Ursa Major II is a galaxy that was discovered in 2006. It is one of the smallest and faintest galaxies known. 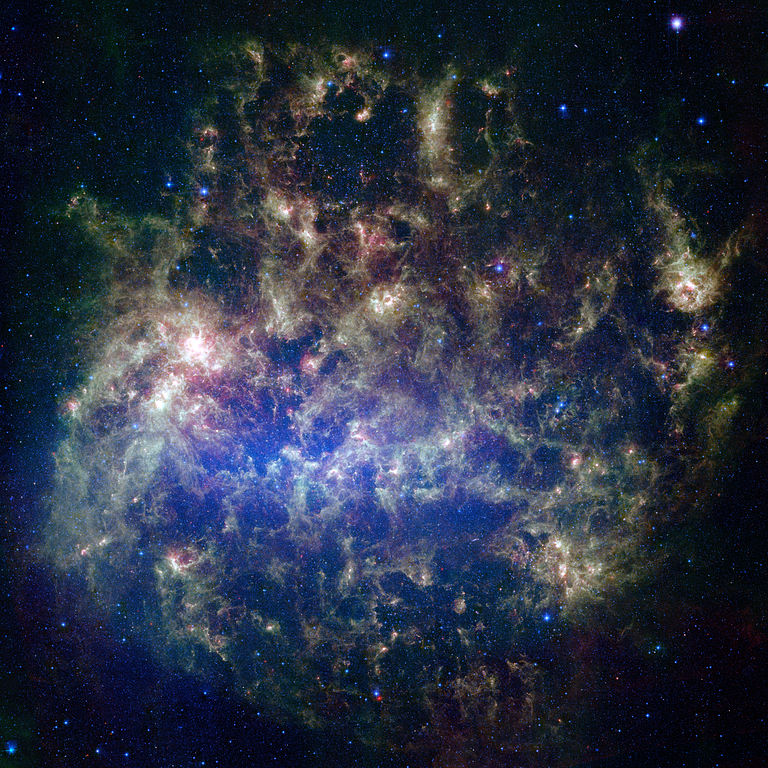 The Large Magellanic Cloud (LMC) is a nearby satellite galaxy of our own galaxy, the Milky Way, at a distance of slightly less than 160,000 light-years. It has a mass equivalent to approximately 10 billion times the mass of our Sun, making it roughly 1/10 as massive as the Milky Way. The LMC is the fourth largest galaxy in the local group, with the Andromeda Galaxy (M31) and Triangulum Galaxy (M33) also having more mass. While the LMC is often considered an irregular type galaxy, the LMC contains a very prominent bar in its center, suggesting that it may have previously been a barred spiral galaxy. The LMC’s irregular appearance is possibly the result of tidal interactions with both the Milky Way, and the Small Magellanic Cloud (SMC). It is visible as a faint ‘cloud’ in the night sky of the southern hemisphere, straddling the border between the constellations of Dorado and Mensa.

The Small Magellanic Cloud (SMC) is a dwarf galaxy. It contains several hundred million stars. Some speculate that the SMC was once a barred spiral galaxy that was disrupted by the Milky Way to become somewhat irregular. It still contains a central bar structure. At a distance of about 200,000 light-years, it is one of the Milky Way’s nearest neighbors. It is also one of the most distant objects that can be seen with the naked eye. It forms a pair with the Large Magellanic Cloud (LMC), which is positioned a further 20 degrees to the east.

The Boötes Dwarf Galaxy is the faintest galaxy yet discovered, with a total luminosity of 100,000 Suns, and an absolute magnitude of -5.8. It lies about 197,000 light-years away in the Bootes constellation. This dwarf spheroidal galaxy appears to be tidally disrupted by the Milky Way Galaxy which it orbits, and has two stellar trails that cross over to form a cross. This makes the galaxy unique since tidally disrupted galaxies usually form only one tail.

The Ursa Minor Dwarf elliptical galaxy was discovered by A.G. Wilson of the Lowell Observatory in 1954. It is part of the Ursa Minor constellation, and a satellite galaxy to the Milky Way. The galaxy consists mainly of older stars and there appears to be little to no ongoing star formation in the Ursa Minor Dwarf galaxy.

The Sculptor Dwarf Galaxy is a dwarf spheroidal galaxy which is a satellite of the Milky Way. The galaxy lies within the constellation of Sculptor. It was discovered in 1938 by Harlow Shapley. The galaxy is located about 290,000 light-years away from the solar system.

The Draco Dwarf Galaxy was discovered by Albert G. Wilson of Lowell Observatory in 1954. It is part of the local group and a satellite of the Milky Way galaxy. The Draco Dwarf is also part of the Draco Constellation. Recent studies have indicated that the galaxy may potentially hold large amounts of dark matter. It is also one of the faintest dwarf galaxies known. It only contains an old population of stars and insignificant amounts of interstellar matter.

The Sextans Dwarf is a dwarf spheroidal galaxy that was discovered in 1990 by Mike Irwin, M.T. Bridgeland, P.S. Bunclark and R.G. McMahon as the 8th satellite of the Milky Way, and is named fittingly, as it is part of Sextans constellation. It displays a redshift because it is receding from the Milky Way at 224 km/s.

Ursa Major I is a dwarf spheroidal galaxy orbiting the Milky Way galaxy. The discovery by Beth Willman et al. was announced in 2005. Being a small dwarf galaxy, it measures only a few thousand light-years in diameter. It was described to be similar to the Sextans Dwarf Galaxy. Both galaxies are ancient and metal-deficient. It is located at a distance of about 330,000 light-years from the Earth. That is about twice the distance to the Large Magellanic Cloud, the largest and most luminous satellite galaxy of the Milky Way. There was another object called Ursa Major Dwarf, discovered by Edwin Hubble in 1949. It was designated as Palomar 4. Due to its peculiar look, it was temporary suspected to be either a dwarf spheroidal or elliptical galaxy. However, it was later confirmed to be a very distant (about 360,000 ly) globular cluster belonging to our galaxy.

The Carina Dwarf is a dwarf spheroidal galaxy in the Carina constellation. It was discovered in 1977 with the UK Schmidt Telescope. The Carina Dwarf is receding from the Milky Way at 230 km/s and is a satellite galaxy to the Milky Way. The galaxy may also be referred to as E206-G220 or PGC 19441. It appears to have formed several billion years after the formation of the other satellite galaxies of the Milky Way as its older stars are younger than 7 billion years. This makes it a relatively youthful galaxy when compared to the Milky Way, which is estimated to have formed 13.6 billion years ago, or nearly as old as the Universe itself. It probably has a complex star formation history, with two possible distinct bursts of star formation. It is also being tidally disrupted by the Milky Way galaxy.

The Fornax Dwarf is an elliptical dwarf galaxy in the constellation Fornax that was discovered in 1938 by Harlow Shapley. He discovered it while he was in South Africa on photographic plates taken by a 24 inch reflecting telescope at Boyden Observatory, shortly after he discovered the Sculptor Dwarf galaxy. The galaxy is a satellite of the Milky Way and contains six globular clusters; the largest, NGC 1049, was discovered before the galaxy itself. The galaxy is also receding from the Milky Way at 53 km/s.

Shortened articles from wikipedia.org. Published under the terms of the GNU Free Documentation License, Version 1.2.