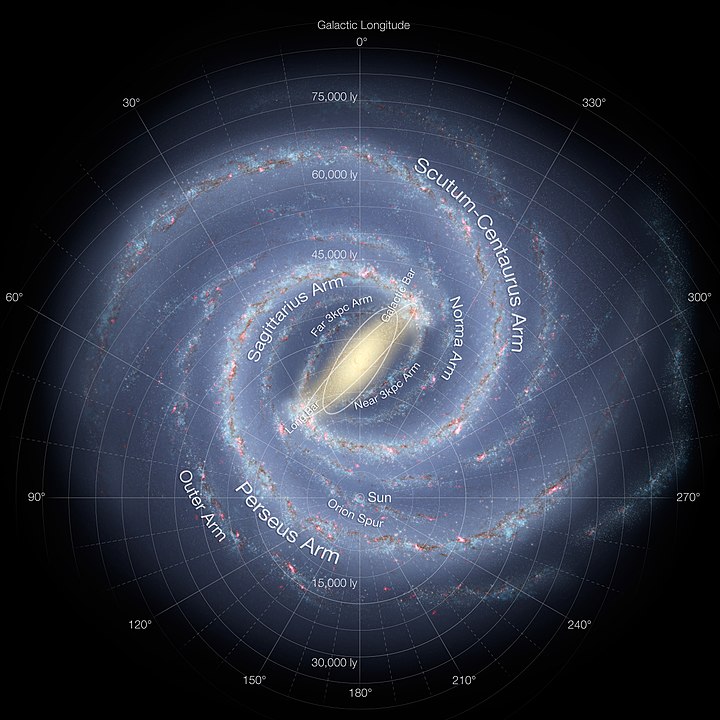 The Milky Way, is a barred spiral galaxy that is part of the Local Group of galaxies. Although the Milky Way is one of billions of galaxies in the observable universe, the Galaxy has special significance to humanity as it is the home galaxy of the planet Earth. The Milky Way galaxy is visible from Earth as a band of light in the night sky, and it is the appearance of this band of light which has inspired the name for our galaxy.

Some sources hold that, strictly speaking, the term Milky Way should refer exclusively to the observation of the band of light, while the full name Milky Way Galaxy, or alternatively the Galaxy should be used to describe our galaxy as an astrophysical whole. It is unclear how widespread the usage of this convention is, however, and the term Milky Way is routinely used in either context.

View from the Earth

The stellar disk of the Milky Way galaxy is approximately 100,000 light years in diameter, and is believed to be, on average, about 1,000 light years thick. It is estimated to contain at least 200 billion stars and possibly up to 400 billion stars, the exact figure depending on the number of very low-mass stars, which is highly uncertain. Extending beyond the stellar disk is a much thicker disk of gas. Recent observations indicate that the gaseous disk of the Milky Way has a thickness of around 12,000 light years – twice the previously accepted value. As a guide to the relative physical scale of the Milky Way, if it were reduced to 130 km (80 mi) in diameter, the Solar System would be a mere 2 mm (0.08 inches) in width.

The Galactic Halo extends outward, but is limited in size by the orbits of the two Milky Way satellites, the Large and the Small Magellanic Clouds, whose perigalacticon is at ~180,000 light-years.

It is extremely difficult to define the age at which the Milky Way formed, but the age of the oldest star in the Galaxy yet discovered is estimated to be about 13.2 billion years, nearly as old as the Universe itself.

This estimate is based on research done in 2004 by astronomers Luca Pasquini, Piercarlo Bonifacio, Sofia Randich, Daniele Galli, and Raffaele G. Gratton. The team used the UV-Visual Echelle Spectrograph of the Very Large Telescope to measure, for the first time, the beryllium content of two stars in globular cluster NGC 6397. This allowed them to deduce the elapsed time between the rise of the first generation of stars in the entire Galaxy and the first generation of stars in the cluster, at 200 million to 300 million years. By including the estimated age of the stars in the globular cluster (13.4 ± 0.8 billion years), they estimated the age of the oldest stars in the Milky Way at 13.6 ± 0.8 billion years. Based upon this emerging science, the Galactic thin disk is estimated to have been formed between 6.5 and 10.1 billion years ago.

Observations by the Spitzer Space Telescope in 2005 backed up previously collected evidence that suggested the Milky Way is a barred spiral galaxy. It consists of a bar-shaped core region surrounded by a disk of gas, dust and stars. Within the disk region are several arm structures that spiral outward in a logarithmic spiral shape. The mass distribution within the Galaxy closely resembles the Sbc Hubble classification, which is a spiral galaxy with relatively loosely-wound arms. It was only in the 1980s that astronomers began to suspect that the Milky Way is a barred spiral rather than an ordinary spiral, which observations in 2005 with the Spitzer Space Telescope have since confirmed, showing that the Galaxy’s central bar is larger than previously suspected. This argues for a classification of type SBbc (loosely wound barred spiral). In 1970 Gérard de Vaucouleurs predicted that the Milky Way was of type SAB(rs)bc, where the “rs” indicates a broken ring structure around the core region.
As of 2006, the Milky Way’s mass is thought to be about 5.8 × 1011 solar masses comprising 200 to 400 billion stars. Its integrated absolute visual magnitude has been estimated to be -20.9. Most of the mass of the Galaxy is thought to be dark matter, forming a dark matter halo of an estimated 600–3000 billion solar masses which is spread out relatively evenly.

The Galaxy’s bar is thought to be about 27,000 light-years long, running through its center at a 44 ± 10 degree angle to the line between the Sun and the center of the Galaxy. It is composed primarily of red stars, believed to be ancient (see red dwarf, red giant). The bar is surrounded by a ring called the “5-kpc ring” that contains a large fraction of the molecular hydrogen present in the Galaxy, as well as most of the Milky Way’s star formation activity. Viewed from the Andromeda Galaxy, it would be the brightest feature of our own galaxy.

Each spiral arm describes a logarithmic spiral (as do the arms of all spiral galaxies) with a pitch of approximately 12 degrees. There are believed to be four major spiral arms which all start at the Galaxy’s center. These are named as follows: Perseus Arm, Norma and Cygnus Arm, Scutum-Crux Arm, Carina and Sagittarius Arm, Orion Arm (which contains our own Solar System).

Outside of the major spiral arms is the Outer Ring or Monoceros Ring, a ring of stars around the Milky Way proposed by astronomers Brian Yanny and Heidi Jo Newberg, which consists of gas and stars torn from other galaxies billions of years ago.

As is typical for many galaxies, the distribution of mass in the Milky Way Galaxy is such that the orbital speed of most stars in the Galaxy does not depend strongly on its distance from the center. Away from the central bulge or outer rim, the typical stellar velocity is between 210 and 240 km/s. Hence the orbital period of the typical star is directly proportional only to the length of the path traveled. This is unlike in the Solar System where different orbits are also expected to have significantly different velocities associated with them, and is one of the major pieces of evidence for the existence of dark matter. Another interesting aspect is the so-called “wind-up problem” of the spiral arms. If one believes that the inner parts of the arms rotate faster than the outer part, then the Galaxy will wind up so much that the spiral structure will be thinned out. But this is not what is observed in spiral galaxies; instead, astronomers propose that the spiral arms form as a result of a matter-density wave emanating from the galactic center. This can be likened to a moving traffic jam on a highway — the cars are all moving, but there is always a region of slow-moving cars. Thus this results in several spiral arms where there are a lot of stars and gas. This model also agrees with enhanced star formation in or near spiral arms; the compressional waves increase the density of molecular Hydrogen and protostars form as a result.

The galactic disk is surrounded by a spheroid halo of old stars and globular clusters, of which 90% lie within 100,000 light-years, suggesting a stellar halo diameter of 200,000 light-years. However, a few globular clusters have been found farther, such as PAL 4 and AM1 at more than 200,000 light-years away from the galactic center. While the disk contains gas and dust obscuring the view in some wavelengths, the spheroid component does not. Active star formation takes place in the disk (especially in the spiral arms, which represent areas of high density), but not in the halo. Open clusters also occur primarily in the disk.

On January 9, 2006, Mario Juric and others of Princeton University announced that the Sloan Digital Sky Survey of the northern sky found a huge and diffuse structure (spread out across an area around 5,000 times the size of a full moon) within the Milky Way that does not seem to fit within current models. The collection of stars rises close to perpendicular to the plane of the spiral arms of the Galaxy. The proposed likely interpretation is that a dwarf galaxy is merging with the Milky Way. This galaxy is tentatively named the Virgo Stellar Stream and is found in the direction of Virgo about 30,000 light-years away.