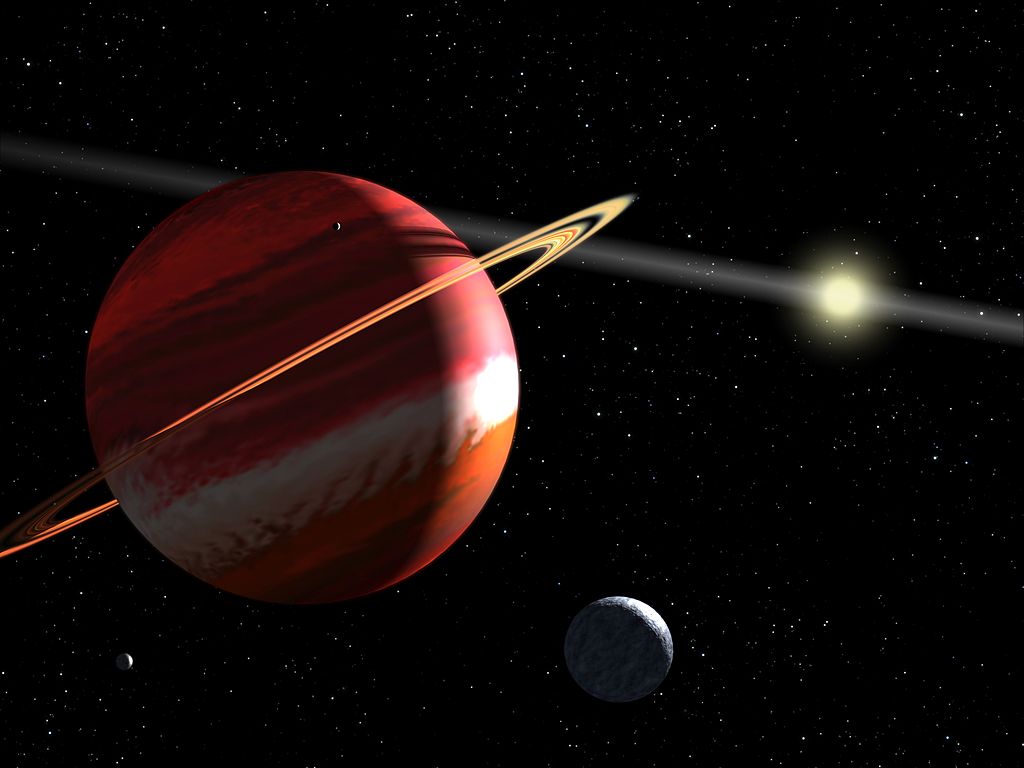 An extrasolar planet, or exoplanet, is a planet beyond the Solar System. As of February 2008, 276 exoplanets have been detected. The vast majority were detected through various indirect methods rather than actual imaging. Most of them are massive giant planets likely to resemble Jupiter.

Extrasolar planets became a subject of scientific investigation in the mid-19th century. Astronomers generally supposed that some existed, it was not known how common they were and how similar they were to the planets of the Solar System. The first confirmed detections were made in the 1990s; since 2000, more than 15 have been discovered every year, and the most in 2007 so far. Now it is estimated that at least 10% of sun-like stars have planets, and the true proportion may be much higher. The discovery of extrasolar planets further raises the question of whether some might support extraterrestrial life.

Currently Gliese 581 d, the third planet of the red dwarf star Gliese 581 (approximately 20 light years from Earth), appears to be the best example yet discovered of a possible terrestrial exoplanet which orbits close to the habitable zone of space surrounding its star. Going by strict terms, it appears to reside outside the “Goldilocks Zone”, but the greenhouse effect may raise the planet’s surface temperature to that which would support liquid water.

For those reasons, current telescopes can only directly image exoplanets under exceptional circumstances. Specifically, it may be possible when the planet is especially large (considerably larger than Jupiter), widely separated from its parent star, and hot so that it emits intense infrared radiation.

The vast majority of known extrasolar planets have been discovered through indirect methods:

Astrometry: Astrometry consists of precisely measuring a star’s position in the sky and observing the ways in which that position changes over time. If the star has a planet, then the gravitational influence of the planet will cause the star itself to move in a tiny circular or elliptical orbit about their common center of mass (see animation below).

Radial velocity or Doppler method: Variations in the speed with which the star moves towards or away from Earth — that is, variations in the radial velocity of the star with respect to Earth — can be deduced from the displacement in the parent star’s spectral lines due to the Doppler effect. This has been by far the most productive technique used.

Pulsar timing: A pulsar (the small, ultradense remnant of a star that has exploded as a supernova) emits radio waves extremely regularly as it rotates. Slight anomalies in the timing of its observed radio pulses can be used to track changes in the pulsar’s motion caused by the presence of planets.

Transit method: If a planet crosses (or transits) in front of its parent star’s disk, then the observed brightness of the star drops by a small amount. The amount by which the star dims depends on its size and on the size of the planet.

Gravitational microlensing: Microlensing occurs when the gravitational field of a star acts like a lens, magnifying the light of a distant background star. Possible planets orbiting the foreground star can cause detectable anomalies in the lensing event light curve.

Circumstellar disks: Disks of space dust surround many stars, and this dust can be detected because it absorbs ordinary starlight and re-emits it as infrared radiation. Features in dust disks may suggest the presence of planets.

Eclipsing binary: In an eclipsing double star system, the planet can be detected by finding variability in minima as it goes back and forth. It is the most reliable method for detecting planets in binary star systems.

Orbital phase: Like the phase of the Moon and Venus, extrasolar planets also have phases. Orbital phases depends on inclination of the orbit. By studying orbital phases scientists can calculate particle sizes in the atmospheres of planets.

Polarimetry: Stellar light becomes polarized when it interacts with atmospheric molecules, which could be detected with a polarimeter. So far one planet has been studied by this method.

Not counting a few exceptions, all known extrasolar planet candidates have been found using ground-based telescopes. However, many of the methods can yield better results if the observing telescope is located above the restless atmosphere. COROT (launched in December, 2006) is the only active space mission dedicated to extrasolar planet search. Hubble Space Telescope has also found or confirmed a few planets. There are many planned or proposed space missions such as Kepler, New Worlds Mission, Darwin, Space Interferometry Mission, Terrestrial Planet Finder, and PEGASE.