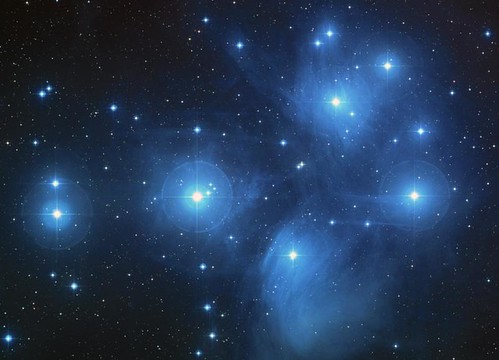 The Pleiades, an open cluster of stars in the constellation of Taurus.

A star is a massive, luminous ball of plasma. The Sun is the best example of a star that we can study, since it is the closest to the Earth. Other stars are visible in the night sky, when they are not outshone by the Sun. A star shines because nuclear fusion in its core releases energy that passes through the star’s interior and then radiates into outer space.

Not all stars are isolated but most have stellar companions. Single star systems are those that have only one star and possibly some planets. A good example of a single star system is the Solar System. Multi-star systems on the other hand consist of two or more gravitationally bound stars that orbit around each other. The most common multi-star system is a binary system, but systems of three or more stars are also found. Larger groups called star clusters also exist. These range from loose stellar associations with only a few stars, up to enormous globular clusters with hundreds of thousands of stars.

Shortened article from Star – Wikipedia. Published under the terms of the GNU Free Documentation License, Version 1.2