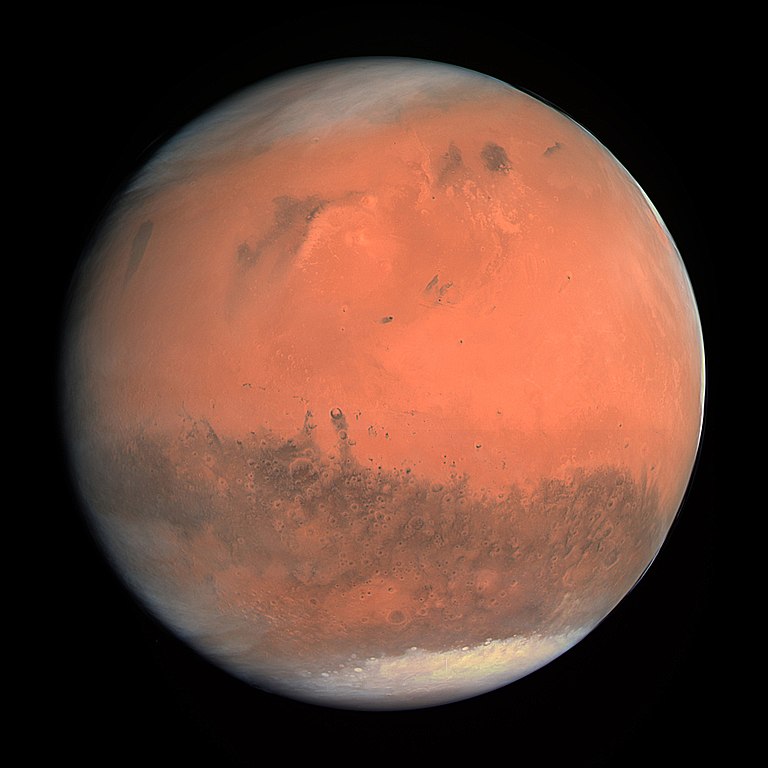 Mars is the fourth planet from the Sun in the Solar System. The planet is named after Mars, the Roman god of war. It is also referred to as the “Red Planet” because of its reddish appearance.

Mars is a terrestrial planet with a thin atmosphere, having surface features reminiscent both of the impact craters of the Moon and the volcanoes, valleys, deserts and polar ice caps of Earth. It is the site of Olympus Mons, the highest known mountain in the Solar System, and of Valles Marineris, the largest canyon. In addition to its geographical features, Mars’ rotational period and seasonal cycles are likewise similar to those of Earth.

Until the first flyby of Mars by Mariner 4 in 1965, many speculated that there might be liquid water on the planet’s surface. This was based on observations of periodic variations in light and dark patches, particularly in the polar latitudes, which looked like seas and continents, while long, dark striations were interpreted by some observers as irrigation channels for liquid water. These straight line features were later proven not to exist and were instead explained as optical illusions. Still, of all the planets in the Solar System other than Earth, Mars is the most likely to harbor liquid water, and perhaps life.

Mars is currently host to three functional orbiting spacecraft: Mars Odyssey, Mars Express, and Mars Reconnaissance Orbiter. This is more than any planet in the Solar System except Earth. The surface is also home to the two Mars Exploration Rovers (Spirit and Opportunity), the lander Phoenix, and several inert landers and rovers that either failed or completed missions. Geological evidence gathered by these and preceding missions suggests that Mars previously had large-scale water coverage, while observations also indicate that small geyser-like water flows have occurred during the past decade. Observations by NASA’s Mars Global Surveyor show evidence that parts of the southern polar ice cap have been receding. 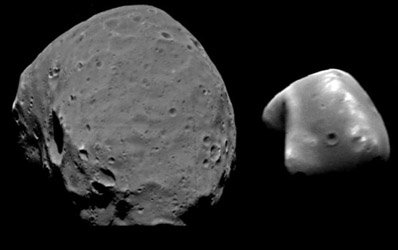 Mars has two moons, Phobos and Deimos, which are small and irregularly shaped. These may be captured asteroids, similar to 5261 Eureka, a Martian Trojan asteroid. Mars can be seen from Earth with the naked eye. Its apparent magnitude reaches -2.9, a brightness surpassed only by Venus, the Moon, and the Sun, though most of the time Jupiter will appear brighter to the naked eye than Mars.